Congested lymphatic system is common.
Many people have badly congested lymphatics and don’t even know it. For that matter, most people have no idea what the lymphatic system is. The reason for this is that conventional medicine in this country does not often consider good health to be a result of taking care of the whole person and finding root causes for illness and disease. It is a case of treating a patient’s symptoms and prescribing medication after one has become ill.

What exactly is the lymphatic system? 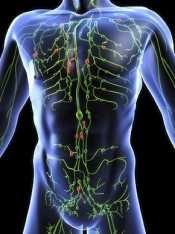 The lymphatic system is an extensive drainage system that returns water and proteins from various tissues back to the bloodstream. It is comprised of a network of ducts, called lymph vessels or lymphatics, and carries lymph, a clear, watery fluid that resembles the plasma of blood. Some scientists consider this system to be part of the blood and circulatory system because lymph comes from blood and returns to blood, and because its vessels are very similar to the veins and capillaries of the blood system. Throughout the body, wherever there are blood vessels, there are lymph vessels, and the two systems work together. However, the lymphatic system is not connected to the heart, therefore it has to rely on some other activity to create the necessary “pumping action” it needs to circulate.

The most important ways of increasing lymphatic circulation are:
1) Laser Therapy with Percussor – Laser is applied to the most congested system of your body, most frequently the sinus or the liver. This stimulates more lymphatic drainage thus resulting in faster healing. We also use a smaller laser unit to directly stimulate lymph glands to dump more toxins. After laser therapy has been completed then the lymphatic system is directly stimulated with an instrument called a percussor. It is a gentle massage-type therapy that is used to manually move stagnant lymphatic fluid through the organs to remove toxins. This therapy works wonderfully and leaves patients feeling great. Most patients see a difference in 3 to 6 treatments.

2) Exercise: This may be done by gently jumping up and down or by bouncing on an exercise ball.

Other examples of congested lymphatics can be:

The cells which rely on the lymphatic system for elimination become less efficient and sluggish as they fill with their own waste. The lymphatic system – which in a healthy person is a life-sustaining system – now becomes a breeding ground for infection. When the fluid enters the bloodstream, which is part of the normal process, infection can now spread to any organ in the body. Many viruses, bacteria and parasites stay locked within the lymphatic system when it is in a sluggish state. The result: degenerative disease and an increase in the rate of aging.

Moving your lymph to help detoxify the body.
Let’s talk about the eliminative organs, such as the bowels, kidneys, lungs, lymph system, or skin, for example. When a foreign substance is present, the body’s first reflex is to expel or eliminate it. When this elimination is suppressed by any means such as taking pharmaceutical drugs, for example, some of the foreign matter gets pushed back into the system. As elimination is blocked, the very substances the body is trying to eliminate become stored within the body, causing any number of disease symptoms. The body then becomes toxic. When this happens, the degenerative disease process begins.

The Benefits of Lymph Drainage Therapy
Lymphatic Drainage Therapy works to help recirculate body fluids, stimulate function of the immune system, and promote a state of relaxation and balance within the autonomic nervous system. Results may include:

From the above information, you can see how important a healthy lymph system is and why it is so important to maintain it. We can take responsibility for our own health by learning what steps to take to get there and then moving in that direction. Preventing illness and disease before it begins should be our main goal.